Does Work Make You Fat?

Does Work Make You Fat? 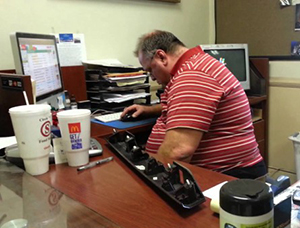 45 percent of workers think so. A new survey of 1,117  employees  by Careerbuilder and the Harris poll reveals that 57 percent of the nation’s workforce believe that they’re overweight and 45 percent think that they’ve gained weight at their present job. Here are the top 3 causes cited by those who are adding pounds:

Six percent of workers also attributed their weight gain to happy hours. On a more positive note, 58 percent of U.S. workers exercise on a regular basis, Those who work out four or more days a week (29 percent) say that they’ve lost weight in the last year.

Some employers are stepping in with gym passes, workout facilities, and wellness benefits, reported by 30 percent of the workers surveyed. Not all employees want to participate, though.  Only half of the employees without wellness benefits stated that they would take advantage of opportunities if they were provided.

45% of Workers Say They Have Gained Weight in Their Current Job, According to New CareerBuilder Survey, Careerbuilder.com, 7/19/18