LinkedIn released their April 2018 Workforce Report last week, confirming a hiring boom in major US cities and across the U.S. March 2018 figures increased by 19.3% against the previous year and were 3.1% higher than February numbers. LinkedIn expects the year-to-year gaps to close in coming months, reflecting major increases in hiring that occurred in Spring 2017.

Industries with the largest year-over-year hiring increases include financial services (20.9%); aerospace, automotive, and transportation (18.8%); and manufacturing (18.8%). Hiring slowed in the professional services industry, up only 9.9% from 2017. Government hiring increased 10% from 2017. 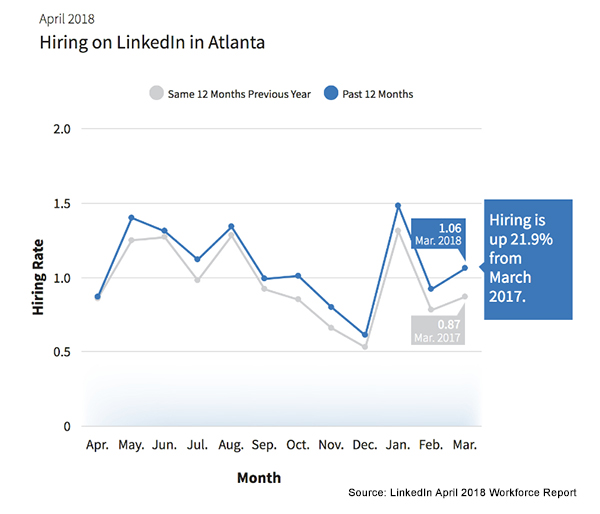 In Atlanta, year-over-year hiring was 21.9% higher in March and the LinkedIn hiring rate increased by 3.4% from February 2018. According to the report, IT and Systems Management skills, Sales, and Management skills are readily available in Atlanta. Engineers, healthcare managers, and non-profit employees are in scarce supply.

LinkedIn’s monthly Workforce Report is based on internal data gathered by the business social network. Over 146 million U.S. workers have LinkedIn profiles and 20,000 U.S. companies post over 3 million jobs on the network each month.