Mark Butler: Don’t Tell Me You Can’t Find a Job

Mark Butler: Don’t Tell Me You Can’t Find a Job

Labor Commissioner Mark Butler says that there aren’t many good excuses to be out of work these days. 2016 and 2017 set new records for employment, workforce size, and the number of jobs available in Georgia. “Politicians are always talking about jobs, jobs, jobs,” Butler told the audience at last week’s GEA Spring Conference, “I’m here to tell you that jobs aren’t a problem. We have to create more workforce.”

Low Unemployment and Competition for Employees 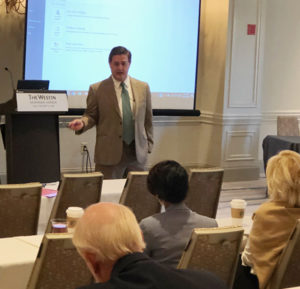 According to the Commissioner, unemployment across the state has held steady at 4.4 percent for over a year. Georgia has the least unemployment since 1990, when there were 2 million fewer in the workplace. The average time an individual remains on unemployment is down to 8 weeks, the shortest duration for any state in the U.S.

Georgia Labor Department figures indicate between 80,000 and 100,000 advertised open positions in the state. That represents about a third of the actual positions available. With only 200,000 on the unemployment roles, Butler thinks that the number of open positions may be greater than the number of workers available in the state. He figures that people are moving into Georgia for jobs.

Responding to a question from an audience member, Butler addressed Georgia’s shortage of nurses and medical personnel. “There’s a direct relationship between a shortage of nursing instructors and the number of new nurses entering into the workforce,” he stated. At public colleges, teaching compensation is currently less than the average pay and benefits packages that nurses can earn. Butler suggested that state universities should evaluate compensation levels for instructors who teach in high-demand fields to assure an adequate future workforce

Butler also informed the conference audience about Georgia Department of Labor’s efforts to improve the quality of Georgia’s labor force, starting with high school and other developmental programs. GeorgiaBEST is a certificate program that is designed to teach students the soft skills needed for employment success. GeorgiaBest started as a test program at 20 high schools in 2012 and has now been expanded to include middle schools, adult education at Technical Colleges, and programs at correctional facilities.

More information about Georgia Department of Labor services for businesses and individuals is available at employgeorgia.com.