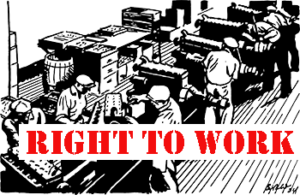 On August 9, voters in Missouri overturned anti-union legislation that had been passed by the general assembly in 2017. Missouri Senate bill 19 prohibited a requirement of union membership or payment of union dues as conditions of employment. The bill was signed into law last year, but the question was placed on the recent primary ballot after a union-sponsored petition garnered over 300,000 signatures.

The language of the ballot measure may have caused some confusion. Proposition A asked voters to approve or disapprove the adoption of  “Senate Bill 19 (“Right to Work”) as passed by the general assembly in 2017, which prohibits as a condition of employment the forced membership in a labor organization (union) or forced payments of dues in full or pro-rata (fair-share); make any activity which violates employees’ rights illegal and ineffective; allow legal remedies for anyone injured as a result of another person violating or threatening to violate employees’ rights; and which shall not apply to union agreements entered into before the effective date of Senate Bill 19?” 67 percent of primary voters voted no to the proposition.

The rejection of the right to work law is directly opposes the recent Supreme Court decision in Janus v. AFSCME that ruled that union agency fees infringed on the First Amendment rights of non-union public sector employees. 22 U.S. states, including Georgia, have right-to-work laws in place. Missouri is the first state to overturn right-to-work legislation with a referendum.