President Establishes National Council for the American Worker. Is it enough?

President Establishes National Council for the American Worker. Is it enough?

On July 19, President Trump issued an executive order intended to develop a national strategy to equip American students and workers to compete in the global economy. Recognizing the disparity between the current 6.7 million job openings in the U.S. and the 6.3 million workers available to fill them, the order proposes the development of new approaches to education and job training.

The economy is changing at a rapid pace because of the technology, automation, and artificial intelligence that is shaping many industries, from manufacturing to healthcare to retail.  For too long, our country’s education and job training programs have prepared Americans for the economy of the past. 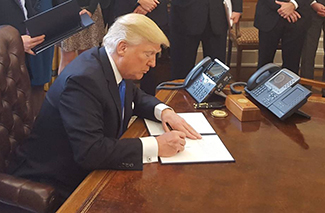 The executive order establishes a new National Council for the American Worker and an advisory group, the American Workforce Policy Advisory Board, designated to “recommend steps to encourage the private sector and educational institutions to combat the skills crisis by investing in and increasing demand-driven education, training, and re-training.” A two year time frame is set for the work of the advisory board.

The core initiatives for the Council and Task Force include:

In response to the new initiative, 23 companies and associations pledged to invest in new programs. General Motors committed to 10,975 workforce training opportunities over the next five years. Others include UPS, WalMart, FedEx, and the National Association of Homebuilders.

According to the White House Council of Economic Advisors, more than 85 percent of government and private spending on workforce development is currently focused on people 25-years-old or younger. By comparison, public and private expenditures on workers over 40 are minimal and even less for people with only a high school diploma. Many of these have stopped looking for work.

Critics of the new initiative think that a more comprehensive approach is needed that includes a rational approach to immigration. In a recent article for The Hill, authors Laura Collins and Anne Wicks prescribe a three-front approach to the workforce deficit that includes retraining and lifelong learning for current workers, education reforms to prepare future workers, and a comprehensive approach to immigration reform to meet current market demands. They maintain that “stricter vetting of H-1B visa applicants, the travel ban, reduced refugee admissions, ending temporary protected status for several countries, and proposed rescission of the employment program for spouses of H-1B visa holders are all actions . . . that have undercut the legal immigration system, prevented firms from hiring capable workers, and stifled economic growth.”