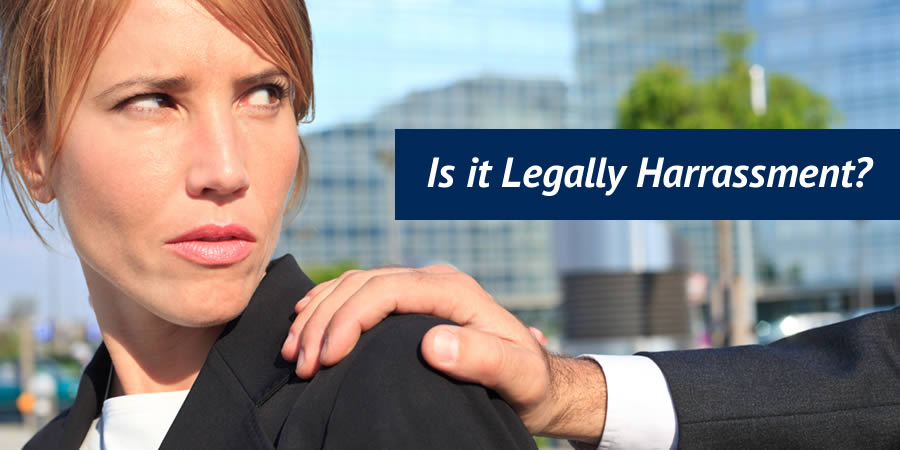 A boss who grabs an employee’s breasts without her consent is indeed guilty of sexual harassment.

At first, I thought this misrepresentation of the law might have been the fault of the headline writer, but then I found this in the body of the article:

“In fact, courts routinely dismiss cases brought by workers who claim their supervisors propositioned them, kissed them or grabbed their breasts.”

“Routinely”? No links or citations to any of these egregious court decisions, which is not surprising.

Guess what, professors? “Harassment” isn’t included in the statute, either. Don’t take my word for it – here is the pertinent part of Title VII, straight from the website of the Equal Employment Opportunity Commission:

It shall be an unlawful employment practice for an employer –

(1) to fail or refuse to hire or to discharge any individual, or otherwise to discriminate against any individual with respect to his compensation, terms, conditions, or privileges of employment, because of such individual’s race, color, religion, sex, or national origin; or

(2) to limit, segregate, or classify his employees or applicants for employment in any way which would deprive or tend to deprive any individual of employment opportunities or otherwise adversely affect his status as an employee, because of such individual’s race, color, religion, sex, or national origin.

Nowhere does the word “harassment” appear.

EEO-based harassment is a judicially-created outgrowth of Title VII’s anti-discrimination provisions. If “harassment” isn’t mentioned in Title VII, then it stands to reason that “severe or pervasive” wouldn’t be mentioned, either.

As I’ve noted recently, “sexual harassment” encompasses a vast spectrum of behavior, from a dirty joke all the way to a rape. And then there is an even more vast spectrum of “sexual” workplace behavior that is not harassment at all, such as consensual flirting, or quietly sharing a dirty joke with the one co-worker who will think it’s a riot.

The Supreme Court has done a good job protecting victims’ rights without turning the workplace into a police state.

First, sexual harassment must be based on sex. Second, the behavior has to be “unwelcome” to the recipient. The Supreme Court could have used a “consent” standard, but it didn’t, because sometimes people “consent” because they’ve been threatened or bullied. The “unwelcome” standard is more protective of victims’ rights.

Third, the behavior has to be severe or pervasive. Severe means it’s really bad, like grabbing an employee’s breasts. Pervasive means it happens a lot, like the umpteenth unwelcome off-color joke.

Sometimes the behavior is both severe and pervasive, but it doesn’t have to be. As long as it’s one or the other, then the employee could have a valid claim.

One other gripe with this column: The authors don’t distinguish “dismissal” of a lawsuit from “summary judgment,” and the difference is significant enough to undercut their entire thesis.

A court generally can’t “dismiss” a lawsuit in the very early stages of the litigation unless it finds, assuming everything that the plaintiff claims is true, that the plaintiff hasn’t asserted a claim for which the law gives relief.

For example, let’s say I sue you because you have brown hair. Even if you really do have brown hair, the court would throw out my lawsuit because our legal system doesn’t recognize lawsuits based on brown hair.

On the other hand, if my lawsuit says that you sexually harassed me, the court would normally have to allow my suit to go forward, even if you didn’t in fact harass me. That’s because I have stated a valid legal claim against you, and in the preliminary stages, the court has to give me every benefit of the doubt.

And that’s not all – if the court thinks I might have a legitimate claim but just did a poor job stating my allegations, it could dismiss my lawsuit but give me another chance to “re-plead” and get it right.

About the only way a sexual harassment lawsuit would be dismissed at this early stage would be if it was obvious from the lawsuit that it was untimely. For example, my lawsuit says, “Plaintiff brings this lawsuit on December 1, 2017, because in 1985, Defendant sexually harassed her.” Since it’s obvious from the lawsuit that my claim is too old, the court could throw it out.

In short, the chance that a court would “dismiss” a sexual harassment lawsuit at the beginning of the litigation is almost zero.

On the other hand, it isn’t unusual for courts to grant summary judgment to defendants in harassment cases, but that is as it should be. Summary judgment is normally granted later in the litigation, after the parties have engaged in discovery. Because summary judgment results in a finding in favor of the defendant (actually, the “movant”) before a trial, the court still has to give the plaintiff (actually, the “non-movant”) the benefit of the doubt on any disputed facts, but the defendant can present undisputed evidence in its favor.

Here is an example of a summary judgment scenario in a sexual harassment case: The plaintiff claims that her boss grabbed her breasts, creating a hostile work environment. She has stated a valid legal claim, and so the lawsuit proceeds.

The defendant then takes the plaintiff’s deposition and shows her several love letters she wrote to the boss. Confronted with the letters, the plaintiff breaks down and admits that she was in a “welcome,” consensual, sexual relationship with the boss. She further admits that she accused him of sexual harassment only because he fired her for poor attendance (which he didn’t want to do, but his boss made him do it).

The plaintiff has now admitted under oath that her boss didn’t sexually harass her. So the defendant can present her deposition testimony to the court and win summary judgment, which disposes of the case without a trial.

(One of the authors of the NYT article apparently believes that summary judgment is unconstitutional. Whatever.)

Just so we present the complete picture, here is a “trial” scenario. The plaintiff accuses her boss of sexually assaulting her and threatening to fire her if she didn’t have a sexual relationship with him. The boss just as firmly insists that they were having a consensual sexual relationship that she initiated. Through discovery, both parties stand their ground.

Now we have what the law calls a “genuine issue of material fact” – in other words, the parties dispute a (the?) key fact in the case. In this scenario, the defendant would not be able to get summary judgment. Instead, the case would go to trial, and either a jury or a judge would receive all of the evidence and decide who was telling the truth.

So, there you have it. Don’t believe everything you read. Even if it’s in The New York Times.

Note: A clear policy and effective training are the best practices for prevention of workplace sexual harassment and for the determination of a consistent response when incidents occur. GEA will provide in-house sexual harassment training for member companies beginning in January 2018. Please get in touch with Mike McCurdy if you’d like to schedule training at your workplace.

This article was originally published in the Employment and Labor Insider blog. Re-published with permission from Constangy, Brooks, Smith, and Prophete, LLP.