The ABCs of Contract Labor

The ABCs of Contract Labor

The Department of Labor reversed the Obama era guidance for independent contractors in June of 2017, but ongoing questions about misclassification continue. Last week saw a couple of new developments.

On April 30, the California Supreme Court issued an opinion in the case of Dyamex Operations West, Inc. v. Superior Court. The opinion only applies to California regulations, but it models a standard for qualification of contract employees. Similar to the DOL guidance, the “ABC test” requires:

The decision directly effects “gig economy” employers like Uber or Lyft, but may also impact the transportation industry and other California employers who employ “freelancers” that work exclusively for one company. 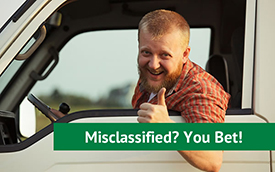 On the same day, a coalition of 12 state attorneys general filed a brief with the National Labor Relations Board in support of a decision granting the right to organize to a group of misclassified employees. The Administrative Law Judge in the case Velox Express Inc. vs. Jeannie Edge determined that Velox Express, an Indiana medical delivery company, misclassified its drivers as independent contractors and restrained them from exercising their right to unionize.

“Illegal employment misclassification is a major and growing problem that harms workers, law-abiding employers, and all levels of government. Misclassification not only denies workers the most basic statutory protections, such as the right to be paid a minimum wage and to be paid 3 on time, but it also contravenes their right to organize for better pay and working conditions.”

The brief further argued that employers who misclassify employees as independent contractors fail to contribute to unemployment systems, do not maintain adequate workers’ compensation coverage, and do not pay their share of employment taxes.