What to Expect from the NLRB

What to Expect from the NLRB

What to Expect from the National Labor Relations Board

So Who Is On This New Board?

For the first time since August of 2003, the National Labor Relations Board (NLRB) has five members who have all been confirmed by the Senate. The Republican members are Harry I. Johnson, III and Philip A. Miscimarra, and the Democratic members are Current Chairman Mark Gaston Pearce, Nancy Schiffer, and Kent Hirozawa. 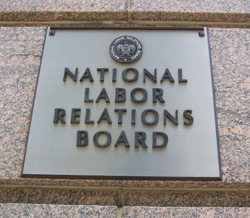 Now that we know who they are, let’s find out what to expect from this new board.

First, we can expect the Board to reissue the dormant ambush election regulations which could result in conducting an election less than 25 days after a petition is filed. A drastically shortened election time means a shorter time period for employers to communicate with employees in union campaigns and could raise important issues of free speech and due process concerns for employers. Also, if the Board reissues the ambush regulations, it is likely that the regulations will include more onerous provisions that were left out of the promulgated final rule which could further raise concerns for employers.

Know Who Could Be Knocking On Your Door

Second, employers may have to allow access to employer intra-office e-mail systems for union activities. In Roundy’s Inc., the Board hinted that it is considering increasing the ability of non-employee union agents to access employer property. While the case arose out of non-employee union members distributing handbills on Roundy’s property to its grocery store customers, the ruling has the potential to go beyond the distribution of paper bills to the use of employer email systems. With a pro-union Board in place, employers may find, in the near future, that if an employer seeks to limit some personal use of e-mail, it must actually limit all personal use- a difficult, if not, impossible task. As a result, employers may have to allow employees to use the employer email systems for union activities.

The Board Isn’t Just Watching What You Restrict At Work

Lastly, employers can expect that the Board will restrict management’s ability to enforce work place policies and procedures, making it more difficult for employers to monitor employee actions at work and conduct their day to day businesses. Under Chairman Mark Pearce, the Board has expanded its interpretation of Section 7 to encompass activities and situations that go way beyond what most would consider to be traditional work place gripes or labor relations. Since Pearce has remained as Chairman, it is likely that this trend will continue.

Notably, the Board has turned its focus to social media policies, striking down many policies they believe to be overly broad and restrict workers’ right to organize. For example, the Board has ruled that the following policy is unlawful:

If you enjoy blogging or using online social networking sites such as Facebook and YouTube, (otherwise known as Consumer Generated Media, or CGM) please note that there are guidelines to follow if you plan to mention [Employer] or your employment with [Employer] in these online vehicles. . .

The Board said that to restrict the release of information on confidential guest, team member, or company could be interpreted to prohibit workers from discussing their own conditions of employment, such as wages and working conditions.

In addition to the social media policies, other workplace policies, such as confidentiality agreements and information security policies, have also been struck down by the NLRB as being overly broad.

The moral of the story here is that the new Board under Chairman Pearce is likely to continue to scrutinize employer’s workplace policies and limit employer’s freedom to apply the rules in the workplace. As a result, it is more important than ever to review and update your policies and employee handbook to comply with the Board’s recent decisions.

So what should proactive employers do? First, employers should establish clear company guidelines and policies, including confidentiality and social media policies, with the recent Board decisions in mind. Employers should also train their supervisors and educate employees on company policies and how to respond appropriately to workplace problems. Second, employers should train their supervisors and managers on how to spot potential union threats and how to address them appropriately. Employers must also establish a clear game plan on how to respond to a potential threat of union campaign in the most time efficient way, including appointing and consulting with the legal counsel. Also, employers should engage in labor audits to spot employees’ complaints and any potential threats of union attack and address them before the issues are brought to the union’s attention. Employers should also engage in mock campaigns to allow supervisors and managers to get a sense of a real union campaign and how they should be prepared in advance. Finally, employers should always remember that the best preventative measure is to maintain a positive relationship with your employees built on trust and respect. Employees that work in an environment where management is responsive to their concerns and respectful of their feelings are far less likely to seek a union involvement in their workplace.

The Board will continue its aggressive stance against employers and is likely to issue many pro-employee/union rules and decisions. The only thing that employers can do at this point is to prepare in advance. Just remember, it is all in the planning.